One Google search about what to talk about on first dates will affirm your doubts as to conversing about your tough topics. Among adults, politics is too confrontational a topic in that people get passionate on the subject and tend to disagree. Religion is too personal and you run the risk of seeming ignorant or insensitive unless you share the same beliefs or are well-versed in the other’s.

Dating apps take some of the pressure off by letting you see the political and religious beliefs of potential matches and even filter by these parameters. Why? Because these polarizing and “taboo” topics can make or break a relationship—even before it starts. But, when you aren’t able to filter out unlikely matches beforehand with a swipe, a first-date conversation will have to do.

Polarizing and “taboo” topics can make or break a relationship—even before it starts.

Let’s start with a hypothetical involving someone named Anna. Anna is a young woman who is on a first date with an acquaintance named Max. During dinner, Max doesn’t contribute much to the conversation. Anna, eager to shift the spotlight, needs to draw Max out to get to know him better. She has no time to waste on a guy who isn’t right for her.

Anna is a passionate Christian. She bases a good chunk of her lifestyle on her religious beliefs. She contemplates asking Max about his religious beliefs. But she has it in her head that asking about tough topics such as religion is inappropriate on a first date. Anna must make a decision. She has two options, listed below:

Anna does not ask Max about his religious beliefs. The rest of the night resumes without issues. It turns out Max is a gentleman and escorts Anna home without trying anything physical. They have a few more dates and Max starts to reveal his true colors on the seventh date. Max is a Satanist, which clashes directly against Anna’s beliefs.

Anna asks Max about his religious beliefs on the first date. Max truthfully relays to Anna about his passion for Satanism. Anna decides she and Max will disagree on many things and in the end, their relationship would not work out. She eliminates Max from her life and meets her soulmate a few weeks later at a Christian club gathering.

What Anna overlooks in Scenario 1 above is the importance of who she is in relation to Max. During the first date, she needs to convey the substance of who she is to Max. At the same time, she must refrain from pushiness and let Max express the best in himself. And smooth conversations materialize naturally. Forget awkwardness because then you’ll be awkward for sure. By going with Scenario 2, Anna doesn’t deny herself and wastes no more time on a guy who isn’t right for her.

If a topic matters to you and has the potential to threaten a relationship with someone, make it known as soon as possible.

If politics, religion, or another such topic matters to you and has the potential to threaten a relationship with someone, make it known as soon as possible. If a guy can’t understand you choosing to bring up politics on a first date, he is probably not the kind of guy you need. The harmony accompanying discourse with Mr. Right is missing. You’ll discover his beliefs clash with yours unsuitably. Or, who knows, you could also find Mr. Right because you chose to take that risk and unintentionally brought yourself closer to a guy who shares in your beliefs. Perhaps he and you find joy in debating what you disagree over.

Make of his or her reaction to your blatant icebreaker as you will. But your risky conversation starter will inform you on who you’re dealing with and vice-versa. Talking about serious topics you might disagree on is a way to weed out guys who are less invested in you—or in whom you might be less invested. 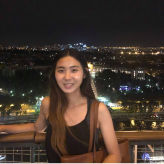 Diane's priority is as a Legal Studies student at UC Berkeley. Even so, Diane is a Cali native and foodie who enjoys hiking, traveling, running, reading, and best of all, writing in her downtime. Diane writes for mxdwn, an entertainment publication online, in addition to The Vim.