When I think of the term foreign films, a few descriptors come to mind: heavy, violent, political. And as riveting as these Oscar-noms can be, it adds a layer of labor to the already difficult task of language-learning. Who has the mental energy to take notes on a movie about a grief-stricken Annabelle discovering her sexuality during 20th-century politically-divided Europe? Umm…not after an 8-hour work-day, please!

But it makes sense. The foreign films that have caught Hollywood’s eye need to be impactful; they must tell a memorable story. So by the time you have decided to put on a foreign film on any given movie night, it’s probably one that has already made its way to the movie theaters in America and which Hollywood has told you is worthy of your time.

Netflix is changing all that. Last year they added an assortment of wide-ranging international movies and series to their Netflix Originals vault. And with the worldwide success of the Spanish series La Casa de Papel (Money Heist) and Latin America’s bilingual series Narcos, it seems people are getting on board with subtitles. Moving forward, Netflix will add 100 non-English language series in production across the globe, Netflix International Originals VP Erik Barmack confirmed in a recent interview with Indiewire.

As foreign films become more accessible in the dawn of Netflix and chill, learning a language through these visuals becomes a no-pressure, entertaining way to pick up some new skills.

So—whether you are actively learning another language or just want to expand your cultural horizon through stunning settings of European capitals like Rome, Madrid, and Paris—here are seven new Netflix Originals to watch for language-learners.

This French series on its first season follows five very different Parisian personalities dealing with love and friendship. Their banter, expressions and well, profanity, make it great for picking up useful French you probably won’t find in a textbook. Plus, the overarching “boy meets girl—boy hurts girl—boy needs to win over girl” plot line works for any romantic comedy lover out there.

2. Tidying Up with Marie Kondo (Japanese)

This reality show follows Marie Kondo, a professional tidier—yes, that’s a thing. Having written four books on the topic and become a somewhat-celebrity for her love for organization, this new Netflix series was an instant success. After just one episode, you’ll see why watching Kondo help Americans declutter their homes is so special. Kondo’s English skills are minimal, so she has a trusted translator by her side and each episode showcases an aside from Kondo where she gives organization tips in Japanese.

Not exactly lighthearted, Cable Girls is a Spanish drama series set in 1920s Madrid. But its telenova-vibe and a love triangle so intense it can break the recovering hearts of once-upon-a-time Twilight fans all over again, Cable Girls draws you in with its never-ending plot twists and those buttery Madrileno accents.

4. How to Get Over a Breakup (Spanish)

Movies about getting dumped are always a good idea because we’ve all been there. This Peruvian comedy about a heartbroken woman getting over her freshly terminated 6-year relationship is perfect for adding a mixture of Latin accents to your list of films.

A splash of Step Up and a pinch of Save the Last Dance, and you’ve got yourself Battle—a dance film following Amalie, a young elite dancer living in Oslo forced to move to a lower-middle-class neighborhood. Amalie meets other-side-of-the-tracks hip-hop dancer who teaches her to dance freely. Sound familiar? While many dance movie plot-lines are borderline identical, the endless dance scenes are what keep us entertained.

Most of us women have, at one point in our lives, said something along the lines of: “You just don’t understand what it’s like to be a woman.” This French comedy follows a shameless chauvinist as he wakes up in a parallel reality where women run the world. It’s a banger for easy French dialogue and a hysterical girl-power vibe.

A less-angsty Skins and a more-realistic Gossip Girl, Baby gives us another high-school drama series full of first loves, broken friendships, and dealing with divorce all set in an upper class district of Rome. Baby is the most sinister of this list, following two affluent teenagers drawn into the city’s nightlife and subsequently, prostitution (for which they received much criticism). So although a couple episodes are not-so-lighthearted, the majority of the first season remains mild and easy to follow. 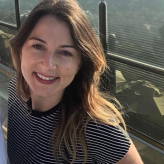 Kaleena is a California-native Health, Travel and Lifestyle Writer based in Barcelona. After a full day of writing for clients and documenting her own experiences abroad, she leaves time for a jog along the seaside and Spanish tapas. In that order. Connect on LinkedIn