The year is 1955. Flying is just becoming popular among the general population. Lots of leg room and free flowing alcohol are the norm for every flight. The stewardess is carving a roast in the aisle, while passengers sit in their comfy seats in nice slacks, button-down shirts, dresses, and heels.

Sounds like a scene from a movie, doesn’t it? Interestingly enough that used to be what flying was like until extra rows of seats were added, the food became processed, the mini bottles of liquor got an outrageous price tag, and the average traveler decided pajama pants were appropriate travel wear.

I understand that you want to be comfortable while traveling, but not everyone wants to see your SpongeBob pjs in public. As a flight attendant for a major airline, I see my fair share of interesting outfit choices. One of the most common discussions among the crew and passengers is the attire of people on the planes and in the airport.

What Not to Do

Some of the outfits we find unappealing and, quite frankly, inappropriate are crop tops, club-wear, pajama bottoms, extra-short shorts, or clothing that isn’t appropriate for your specific destination (e.g. shorts and a tank top when you’re heading to Boston in the middle of a snowy winter). You will definitely irritate your flight attendant and probably receive some sort of “look” from them if you ask us to warm the plane up while you’re wearing daisy dukes and a camisole.

About That Leggings Debacle…

A few years ago, United Airlines was in the spotlight for not allowing a few passengers on their plane because they were wearing leggings. The entire story with the important details was not released immediately, and it caused a major uproar among average people, as well as celebs. The whole scoop was that these girls were traveling on employee passes—meaning they didn’t have to pay full price for their tickets.

Aside from the free or discounted flights, when you travel on most major airlines using employee passes, you agree to adhere to a certain code of conduct. This includes a dress code—and, in this case, the code specified “no leggings.”

When you are using an employee discount of sorts you become the face of that company and they do not want anything less than professional people/outfits representing their brand. If that doesn’t work for your personality, then don’t travel on a friend’s extremely discounted pass. To me, if you’re hooking me up with anything less that a full-price ticket, I will do whatever is necessary to thank you. Wearing some nice pants and a button down shirt for a few hours doesn’t bother me as much as paying hundreds of dollars for a plane ticket if I don’t have to.

Playing it Safe: What to Wear Instead

When you’re traveling, you need to be considerate of your fellow travelers. Dress in comfortable attire that is not revealing or skin tight. We are 100% behind the yoga pants/thick leggings trend (they’re comfy; we get it!), as long as your upper half is covered completely. Also, if you know you get cold easily or maybe plan ahead for a colder atmosphere by bringing a jacket and/or a personal blanket. The airlines do not provide a blanket on every flight, and it’s near impossible to get the temperature on each aircraft perfect for each individual on that plane.

A good rule of thumb? If you wouldn’t wear it to lunch with your grandma, then don’t wear it on the plane. 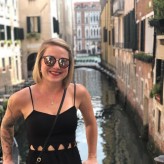 Dacia is a flight attendant for a major airline—a dream job that lets her travel the world and meet interesting people all the time. She hopes to command a room like Mrs. Maisel with stand-up comedy one day. Dacia’s favorite things include SF Giants baseball, country music concerts, and playing with all the dogs.